Martin and Graham are a couple very much in love, looking to start their own family. However, unlike for many couples, where this can happen in the blink of an eye, they’ve had to put a little more thought into it.

Martin explains to me that they have been lucky enough to choose the route of surrogacy and are flying out to America on October 1st, excitement lights his eyes as he says “By the 12th, we should be pregnant”.

Both work for iCandy, the British company famous for their superb designer pushchairs and family-focused ethos. Martin is the Managing Director and has helped shape the iCandy brand, whilst Graham has the important role of being a buyer. Although at first wary of working together, they have set things up so Graham does not report to Martin and they only allow each other half an hour of work-talk at the end of each day – or else it would soon become the only subject of the day!

iCandy is a warm and inclusive company where everyone is involved in making choices about the products – right down to the cleaning lady! They have been incredibly supportive of Martin and Graham’s life changing decision to have children and are all very excited for them. Taking the first steps into fatherhood can be a daunting challenge for most men, but having a very special working-environment will be invaluable to the couple.

I can see the kindness in both men as soon as I meet them. Throughout the conversation – which is full of laughter – I get to hear Martin’s great sense of humour and a wonderful excitement around having children from Graham. I can’t help thinking what wonderful fathers they’ll make.

When did you know you first wanted children?

M: For me, it was very young. I’m the eldest of 6 children, whereas Graham’s the youngest of 4, so being Irish I always had kids around me and I always knew that having children was on the agenda for me. Graham – probably not until you met me really?

G: Well, from my point of view I never even knew it was a possibility. In my lifetime, Martin and I have gone through the legalisation of civil partnerships, now the introduction of equal marriage, the adoption-law changing so that same sex couples can adopt and then the use of surrogates through other countries and stuff happening – I had no idea that was even going to be a possibility so I guess once that starts happening you start thinking about it more. Talking to Martin, he’s always been really pro that idea, and it’s just something that he always thought that we would have, so I guess it’s gone from there.

M: It was either that or more dogs!

You mentioned reading about schools. Have you been reading any parenting magazines or books in preparation?

M: I have been reading a couple of things on FQ, where I’m like “Oh , I hadn’t thought of that!” Like, when you’re up all night, 8 steps to be bright eyed again, eat an apple, put teabags on your eyes, these sort of things. I never knew an apple had this effect on you. Then there’s the simple things that I hadn’t really thought of! For example, breast-feeding. I was breastfed as a child and I’m rarely ill, Graham on the other hand – I don’t think you were breastfed – and he’s probably more susceptible to things than I am.

So we’re wondering where are we going to get breast milk from? You know we can’t, so then we go back to the option we have with our surrogate that she can feed that child – express breast-milk – but it’s things like that. I think of the vitamins you’re going to get from the mother so to speak (although our surrogate wouldn’t be the biological mother but still she has breast milk) and that would be great. So then you start researching breast milk and you can actually buy breast milk, people sell breast milk! I never knew that until now!

G: Although, as part of the process of surrogacy, we went through a psychological screening and the psychologist who did that actually provided us with a list of books that are recommended for anybody going through this process. It’s books for us to read about the process but also books on how to explain the process to children going through it with age appropriate information for different stages of their life. It was things I hadn’t thought about like right from the start, you explain to the child what the roles of the surrogate mother and the egg donor were, how important they were, how much we wanted the child and why we went through the whole process, so we need to read up heavily on that.

M: We also have an arrangement with both our surrogate and egg donor that we have an open relationship with them that basically means in years to come should our children want to meet them or contact them then they’d both be happy to engage with the children. Secondly, when we go back to have more, we would like to use the same eggs and the same surrogate ideally. It’s a way of connecting three families really. It’s American = they love everything! There are no barriers.

G: I think, the more you try and keep that information away from the child, the more harm that could do. The more open you are, the more normal it is; it’s not a problem in any way.

Has iCandy’s ethos and charity connections made you change any initial perspectives on families and parenting?

M: For me, supporting The Lullaby Trust and being exposed to SIDS is probably the scariest thing. Being part of a family business we do have a close relationship with Bradley and Warren who are third generation of the family, and also their children. We are a family run business so when people have more family issues there’s a little bit more sympathy towards them. Maybe when we have kids we might eventually have a crèche here, I don’t know. People have been asking me for years and I’ve said “No, no, forget about it!” and now I’m having my own kids it’s “Maybe…”

G: Martin mentioned the Lullaby Trust, obviously before that we worked with a charity called Bliss [for premature and special care babies]. I was able to go to some of the events they held and you just hear these stories that are very distressing and upsetting, but also hugely inspirational. Stories about the amount of work that medical professionals will put in, what families go through and the support they receive from these charities that they are so, so grateful for and that – although these hideous horrible things can happen – sometimes there are some really positive outcomes from it: That does give you a lot of hope. Although it is very frightening what some parents have to face. It turns their life upside down.

Do you have your eye on any particular iCandy products for your little one?

M: Graham has one, one that I probably wouldn’t have and then I pick another one. For me, I just love the Peach, it’s my number one product, and, Graham, you’re more Strawberry?

G:To be honest with you, I do tend to pick things based on how they look, which isn’t the best way to necessarily do it. I love the styling of most of our products, the new Raspberry, I think…

M: Yeah, the new Raspberry’s going to be great.

G: We’re definitely going to have it. I think we’ll end up having multiple models to be honest.

M: We’re already looking at buying some which is weird because I’m thinking, “Will we have that colour? It’s getting a bit low. We’ll see if we can get hold of that one before it goes out of stock.” But I did mention they might want to do a bespoke one for us.

G: Yeah, that would be nice, one that was unique to us.

How do you think being a parent will change your lives most?

M: I think for me the big change would be that this business has been my baby for such a long time and I’m going to have to share it with real babies!

G: I’m hoping it will just enhance what we’ve already got. I mean, I’m realistic that it’s going to be an awful lot of work with upheaval, change and lack of sleep, but I’m hoping it’s just going to be the icing on the cake. I couldn’t be happier than I am being with Martin, so I just think that adds the final layer really. The fact that we would have a family life, it would just be everything really.

Graham and Martin should have a new addition to their family around June next year and are secretly hoping for twins! 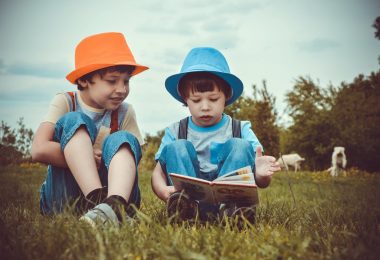