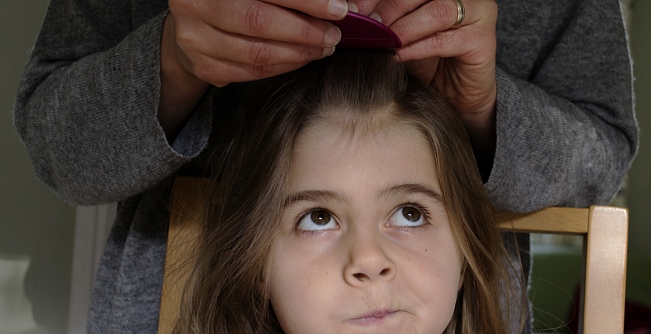 With 63% of children in primary school catching head lice, it’s likely that you will be facing them in your household sometime soon, or already have.

What do you really know about head lice? And more importantly, how can you help prevent them? We’ve teamed up with Vosene Kids to put together a handy head lice guide that should cover all the bases.

What is a head louse?

Also known as Pediculus humanus capitis, a head louse is an obligate (meaning it needs a host to survive) ectoparasite (ecto means it lives on the surface of the host) that lives on the human scalp.

They are small, generally 2.5 to 3 mm long, wingless insects with antennae on their head, six legs on the thorax and an abdomen. They also have a pair of spiracles on the abdomen, which they use to breathe.

Are head lice and nits the same thing?

Though the terms are often used interchangeably, nits and head lice are not the same. Nits are the empty eggshells left behind after the lice have hatched. Lice are the living insects. As for eggs yet to hatch, well we just call them eggs!

How can I tell the difference?

The white specks are the nits. They’ll stick to the hair until they’re combed out and shouldn’t be mistaken for lice. The lice are grey or reddish brown and can be harder to see until you comb them. This is often why people comb onto a blank piece of paper to establish whether there are still live insects in the hair or not.

What is the life cycle of a louse?

The normal lifespan of a head louse is 32-35 days if they aren’t killed before this time. Six to seven days after the egg is laid it hatches and the louse emerges. Over the next ten days the louse gradually moults until, after its third moult it emerges as an adult louse – the female is slightly smaller than the male.

Once adult, the lice will mate and the female will lay her first egg 1 or 2 days after mating. The female can lay approximately 3 to 8 eggs per day for the next 16 days. By day 32-35 the louse will die.

How prevalent are head lice?

Head lice have been around for as long as modern humans have existed and are a very common part of childhood. A survey of 1000 UK mums in 2013 found that 63% of parents with 4-11 year olds say their child has suffered from head lice.

Can I catch head lice from pillows, clothing, brushes and the like?

Studies repeatedly indicate that there is no or very low risk from household objects. Head lice are designed to attach to hair and this can make it hard for them to cling onto other objects even if they have some hair-like fibres.

Neither; there is no scientific evidence to suggest that lice prefer dirty or clean hair. Lice aren’t picky parasites – their sole ambition is to find any scalp to settle down in and call home. They’re also tenacious enough to resist all the hair washing you throw at them.

Can head lice jump or fly?

Contrary to belief, head lice cannot fly or jump. They tend to get from one scalp to the other by direct contact. If you think you’ve seen one jump it’s most likely the result of static electricity coming off your hair.

Do they prefer long or short hair?

Again, no preference here. Hair has to be at least 1cm long for the head lice to survive. If that box is ticked they are perfectly happy to settle down.

How do we catch head lice?

The most common way to catch head lice is head to head contact. Very rarely they can passed via sharing objects which touch the head like headphones, hats or brushes, though no studies have confirmed that objects play a significant role in transmitting lice.

What are the symptoms of head lice?

Itching, although this can take up to three months to present itself in some cases, and in some instances there will be no allergic reaction and no itching at all. A rash on the back of the neck caused by an allergic reaction to head lice droppings is also another tell-tale sign.

Can you help prevent head lice?

A recent survey of 1500 mothers shows that 1 in 4 mums think there is nothing they can do to prevent head lice. However, this is not the case. There are some simple, quick and easy steps parents can take which really help prevent the dreaded bugs coming for an unwelcome visit!

The first and most important step is to be informed. Another recent survey carried out on behalf of Vosene Kids found that 8 in 10 mums are still embarrassed about their child catching lice, which might prevent them seeking advice.

To help tackle this issue a new online campaign called #Nitwatch has just been launched. On the #Nitwatch site you can view an online heat map which shows where head lice outbreaks are occurring, allowing you to keep on top of what’s happening in your local area. You can also register your own concern for your area – there is also plenty of other important information and advice on the site to help you beat the bugs.

So what can I actually do to help prevent head lice?

Checking for head lice is the most important step in curbing their spread. Catching them as early as possible will make it much harder for the critters to spread throughout a community.

We recommend the following steps:

Tie back long hair to make it more difficult for the lice to travel from head to head.

Use a shampoo and spray that helps prevent head lice; something from the Vosene Kids’ range is a great option for parents, first and foremost they will keep hair healthy and shiny, and more importantly, they will help prevent head lice whilst only containing natural ingredients such as Tea Tree Oil and Lemon Eucalyptus.

Regularly check your child’s hair. At every hair wash visually check the hairline behind the ear and the nape of the neck. You’re looking for little white specs. Sometimes you might even be able to see the lice moving, though since they are dark this will be harder when the hair is wet.

Once a week do “detection combing” with a conditioner and a fine-toothed comb.

What is detection combing?

Detection combing uses exactly the same technique as combing when you have head lice. Get a fine-toothed comb (often called a nit comb), rub in a generous amount of conditioner and comb through the hair. People use different approaches when it comes to combing, but the rule of thumb is that the hair has to be wet and should have conditioner in it. You should use a technique that ensures you don’t miss any patches of hair.

What am I looking for?

Whitish, shimmering specs which are sometimes mistaken for dandruff. These are nits; the empty eggs that lice have come out of. Nits in development are brownish-grey and live lice are brownish-red.

How do I get rid of head lice?

Treat the infested person immediately with suitable anti-lice agents. Consult your GP or pharmacist for the best product and check other potentially infested people for lice with a nit comb.

Head lice can’t survive off the scalp for long, so whilst it’s possible to catch them from clothing such as hats and bedding, it’s extremely unlikely. However, you may still consider washing all bedding and clothing at 60 degrees.

Stand Up to Head Lice with Nitwatch!

This month Vosene Kids’ #Nitwatch campaign started – a national service to monitor head lice outbreaks across the UK and provide advice and support for parents in need! Parents can check the Nitwatch heat map to see where head lice outbreaks are occurring across the country. You can also tweet #Nitwatch to help populate the map if you have an outbreak in your family or register a concern on the #Nitwatch Facebook page or website.