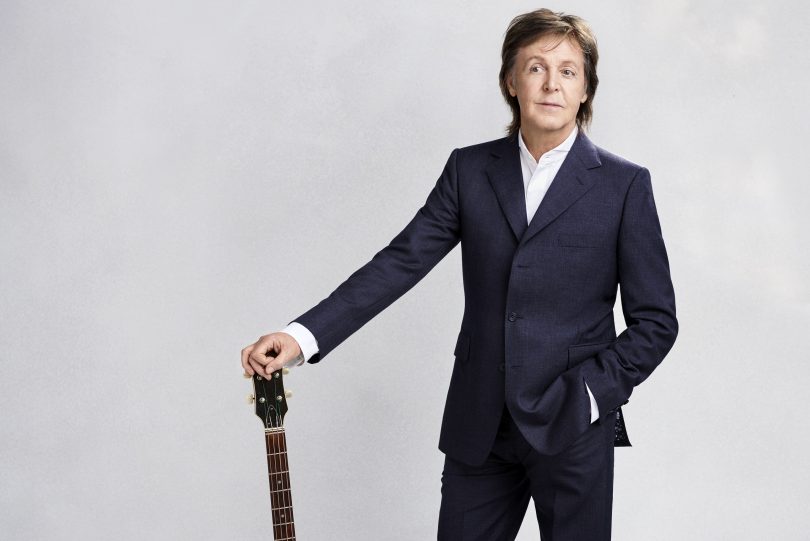 Even as far back as the flower power summer of 1967, when he was just 25 and stupefying TV viewers with candid drug confessions, Paul McCartney already had grandchildren on the brain.

In one of the Beatles quaintest songs, When I’m 64, there’s a line that runs, “Grandchildren on your knee/Vera, Chuck and Dave.”

Over 50 years since that pipe-and-slipper lyric, and eight non-fictional grandchildren later, he’s reified that image with the publication of his debut children’s picture book, Hey Grandude!. (Though it’s technically his second children’s book after 2005’s High in the Clouds.)

The idea for it was sparked by an off-the-cuff remark by one of his grandchildren and tells the story of Grandude and the quite fantastical adventures he takes his four grandchildren on across the globe with the wave of his magic compass, from golden beaches to alpine vistas.

When asked where he’d go if he possessed a compass like this, McCartney replies, “The Caribbean — probably because I love the Caribbean islands. I’d have a lovely swim and run around on the beach. Or I could go to Greece, where I love the beautiful, clear blue waters.”

Never one to be accused of moping around (he’s written songs in the hundreds, you know), there’s a motivational message to be found within the book’s action, for both child and parent.

“It starts off a rainy day and they’re all down and grumpy — and then they go to the magic beach. I suppose the idea is: don’t be grumpy, sad and down – do something about it. If you’re feeling down, read a nice book or play some good music and get yourself out of the mood.”

Hey Grandude! is cosily suited to a bedtime read (like every good children’s author, there’s a slumberous finish with all the kids tucked up in bed), yet McCartney’s childhood was void of such nightly moments.

“I would read stories myself, but it just wasn’t one of those households where your parents read you stories. I read Treasure Island – I love that. I also read all the annuals like the Beano, the Dandy and Eagle.

“But my dad did fix up headphones that came up to our bedroom so we could listen to the radio, and in a way that was like storytelling.”

How does the author of When I’m 64 feel about being a grandfather now that he’s in his late 70s? “It’s lovely just hanging out with them. Most kids have a fresh kind of attitude,” he says.

“When you’re just with adults all day, you don’t get the fun that kids bring, so you go home and you see the kids and they say funny things and make you laugh.”

Ever the ceaseless inventive engine that McCartney is, this might not be the last we see of Grandude.

“If people don’t like it, it’ll just vanish without a trace. But if people like it, then I’ve definitely got a few more adventures up my sleeve – or Grandude has.”